I co-authored with Bastien Irondelle (Sciences Po Paris) a book chapter on the French strategic culture, published in a collective book entitled Strategic Cultures in Europe.

This is the first book adopting a common framework to compare the strategic cultures of all of the EU member-states. The product is then theoretically sound and empirically extremely rich, and should be of interest to anyone working on european security issues.

The book can be ordered on the editor’s website. 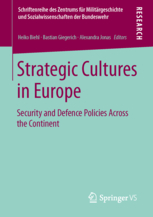 I published a book chapter (in French) in an edited book entitled “Thinking About Collective Violence”, edited by Cynthia Salloum and Benjamin Brice.

The book is a collection of essays by historians, political scientists and lawyers trying to grasp the different forms of collective violence (religious violence, war, genocides…).

My own contribution focuses on the concept of strategic culture, and tries to provide a balanced assesment of its analytical usefulness.

The book can be ordered here, and is also available as an ebook.

My new paper has just been published by Contemporary Security Policy, and is available from here (behind a paywall) and in pdf.

Here is the abstract:

This article looks at cases in which political leaders have engaged in seemingly inconsistent behaviour and explores how they framed and justified their decisions. After showing that strategic culture is composed of different facets, I argue that when faced with conflicting pressures from the international environment and their own national constituencies, political leaders intentionally manipulate facets of their own strategic culture to legitimate a decision, made for contingent reasons, to participate (or not) in a military operation. I illustrate this argument by analysing in depth the decision-making process and public justifications of the German participation in the European and Security Defence Policy (ESDP) mission EUFOR Congo in 2006 and its refusal to militarily participate in a similar mission in Chad in 2007. This conception of strategic culture as both a constraint and a resource for policymakers reinforces our understanding of the boundaries of strategic culture’s explanatory power, and provides an explanation of seemingly inconsistent foreign policy behaviours.

An earlier draft was presented at the ISA annual convention in Montréal (2011) and won the honorable mention of the Alexander George Best Graduate Student Paper Award.

I am extremely grateful to Keith Krause, Stephanie Hofmann, Theo Farrell, Thomas Rid and Heather Williams for their help on earlier versions of the paper.