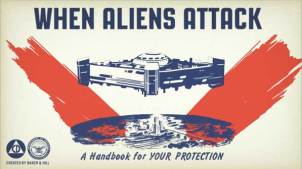 This is a slightly longer version of a post on Kings of War.

I recently watched Battleship and, frankly, I had a lot of fun. The movie is at times thrilling, visually impeccable, voluntarily caricatural (hence funny) and if, like me, your favorite mind-clearing technique is to watch a blockbuster, you should appreciate it. As a reserve naval officer, I was sort of bound to enjoy it anyways because of the beautiful ships displayed. However, after a good two hours of laughs and visual entertainment, the movie got me into thinking about the cinematic expression of strategic concerns in the U.S.

Several scholars, in particular James S. Shapiro or James Der Derian have shown the epistemic significance of cinema as a way to both show and constitute specific world visions. In particular, Hollywood (producers, actors, agents, etc.) being the largest entertainment conglomerate in the world, it is both sensitive to the political climate in the U.S. and is a great medium to export and, to a certain extent, shape these political trends. For example, several American actors opposed the 2003 invasion of Iraq, a mobilization significantly different from the opposition to the Vietnam War in the 1970s. But while some liberal-minded Hollywood stars can sometimes oppose the U.S. foreign policy, a specific sub-field of the Hollywood production is much more closely associated with the mainstream discourse.

Jean-Michel Valantin has convincingly shown that the production of “national security movies” is closely linked to the Pentagon, which issues contracts to the cinematographic industry (mostly to promote its high-tech materials in blockbusters). The deal is beneficial to both parties: directors have access to top materials, military advisors, etc. and can make visually attractive (hence very often lucrative) movies, while promoting the Pentagon’s views. It is simply impossible (or at least very time-consuming) to make an exhaustive list of such movies. But just think of Top Gun, virtually every Jerry Bruckheimers’ productions or every Michal Bay’s movies as a starter, add the adaptation of Tom Clancy’s novels and you already have a good list.
Valantin shows that to a large extent, these movies reflect the strategic concerns of their times. For example, the soviet threat is illustrated with the alien movies of the 1950s, the Vietnam War by movies such as The Deer Hunter or Apocalypse Now, the reaganian moment finds its proponents in Rambo III or James Bond (The Living Daylights) and the post-cold war threats (terrorism, mafias, all-mighty and intrusive government) are echoed by The Jackal, The Sum of All Fears, Enemy of the State or the Bourne trilogy.
Interestingly, this movie production can sometimes be critical (the Vietnam War movies, or the critiques of the CIA in the Bourne trilogy), but is always a reflection of the greater American strategic concerns.

In this particular post, I focus on a specific sub-genre of the “national security movies”, namely the alien invasion movies.

I created a graph from this list to illustrate a few points.

The data are probably incomplete (my guess is that there has been more U.S.-produced alien movies than listed here), but I did not find a better listing and I don’t think that it would change the patterns observed here anyways.
The blue graph represents the overall number of movies featuring aliens per year. It can be anything (horror, comedy, sci-fi, etc.) and comprises movies as different as Star Wars, Species, Cocoon, Abyss, Independence Day, E.T. or Men in Black.

The red graph is much more interesting. I selected the movies according to these relatively strict criteria:

The results are telling. We can see that the “alien-invasion/we are all gonna die” sub-genre represents almost every movie featuring aliens between 1949 and 1959, which has been interpreted as a representation of the communist threat.

This sub-genre is nearly forgotten in the 1980s, which showed almost nothing but E.T.-like, nice and harmfulness aliens. There is a small peak in the 1990s, mostly because of Independence Day and X-Files, but the most fascinating trend is the renewal of the genre since 2003-2004 and the release of movies such as the Transformers franchise, Skyline, Battle: Los Angeles, Cowboys and Aliens, The Darkest Hour, The Invasion, Night Skies, Alien Abduction, The War of the Worlds or, more recently, Battleships.

If we take Valantin’s hypothesis seriously, this renewal can certainly tell us something of the current U.S. strategic thinking. Here are a few thoughts, far from definitive.

SPOILER ALERT: the following paragraphs will reveal parts of the plots of the above-mentioned movies, including Battleship (not yet released in the U.S. and Canada)

The few, the proud. Obviously, many of these movies sing the glory of the U.S. armed forces. However, it is interesting to notice which specific service is particularly advantaged. Independence Day was very much an Air Force movie, displaying the beauties of cyber-weapons and the courage of the jet fighter pilots. But it was in the 1990s, when everybody was still stunned by the success of the Gulf War and when the strategic debate was all about the Revolution in Military Affairs (RMA). Recent film-makers have to deal with the anxiety in strategic thinking created by the long campaigns in Iraq and Afghanistan, and the realization that the fog of war is unlikely to be removed anytime soon.
A scene in Skyline can be read along these lines: a B-2 stealth bomber, accompanied by several drones and fighters, is able to launch a nuclear missile at the alien mothership. But it doesn’t work! The mothership reassembles and attacks again, like if nothing had happened! The scene is the anti-Independence Day moment of the movie: when the heroes realize that their most advanced technologies won’t save them and that what had been considered the ultimate weapon, able to sanctuarize a territory (see the French nuclear doctrine), is worthless.
Unsurprisingly, the new heroes are the grunts: those who hold their grounds and fight protracted battles. For example, Battle: Los Angeles is all about a platoon of Marines, led by a staff sergeant, who pretty much behaves as a strategic corporal. The marines fight an enemy literally buried under the ground, controlling the city and having established air superiority (once again, the USAF doesn’t look good). In a sense, Cowboys and Aliens can be seen along similar lines, the heroes breaching the mothership and forcing the aliens into a ground battle, hence removing their technological advantage. Can’t you smell the Counter-Insurgency (COIN) debates behind this representation of the armed forces?
Battleship is interesting on that regard because well, you know, the U.S. navy saves the world and stuff. It is probably already the sign of the end of the COIN era and the beginning of a new focus on the global commons and the strategic roles of the navies.

Causes of war. In almost all of these movies, the aliens come to grab earth’s natural resources. The want water in Battle: Los Angeles and Battleship, conducive metals in The Darkest Hour, brains in Skyline, gold in Cowboys and Aliens, or simply a new planet (ours) in the Transformers franchise. In every case, a resource-hungry alien power tries to overcome mankind in order to achieve its goals. Of course, this plot resonates with contemporary debates on energy scarcity and the need for a new global energy order. A country as dependent on oil and other resources as the United States is obviously sensitive about risks of a peak oil and sees the emergence of resources-driven competitors as a potential threat.

Looking for a new peer-competitor? The notion of peer-competitors, which designates a state which could be as powerful as the United States, is very important in the American strategic debate. Interestingly, while the emergence of a peer-competitor is officially feared, one almost has the impression that the U.S. wished to have one. It is as if strategists (military and civilians) were frustrated by the last decade of relatively low-tech COIN (although some new technologies were widely used on the battlefields) and wanted a real competitor to emerge in order to finally be able to use their expensive and so sophisticated hardwares. Screw the insurgent and his AK-47: we want large-scale air battles and cruise missiles to flow! This is translated in the movies by the use of high-tech of some kind, even in movies worshiping the action of the local grunt. In Battle: Los Angeles, the Marines finally destroy the mothership by calling an airstrike (or a cruise missiles strike, I don’t remember for sure) and in Cowboys and Aliens, Daniel Craig is able to use a special gauntlet made up of alien technology.
In Battleship, the aliens generate some kind of energy shield, that isolates Hawaii and prevents a powerful fleet to get in. Fortunately, an American-japanese task force trapped inside the energy field destroys some alien aircrafts with its Arleigh Burke class destroyers (apparently, two Tomahawks missiles can do for an alien aircraft) and, when its ships are destroyed, uses an old WWII Iowa-class battleship to finish the mothership. Now, here is the trivia: in your opinion, which country is deploying anti-access strategies and can be perceived as a threat by both the United States and Japan ? Yes, you’re right.
Once again, we notice the cinematographic representation of a contemporary strategic concern.

I probably missed a lot of aspects in this short analysis, and it would be interesting to extend the study to other sub-genres. For examples, one could look at the representation of UAVs in movies such as Body of Lies and Eagle Eye,  at the civilizational discourse in the new trend of Greek mythology-inspired movies (300, Immortals, Wrath of the Titans, etc.), or the recent super-heroes movies. I just hope I won’t have you overthink the next blockbuster you’ll watch.

7 thoughts on “Alien invasions and the U.S. strategic debate”